There is a conspiracy theory that Pyramids were built by aliens or by some lost advanced technology of a prehistoric era. 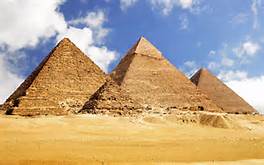 The most common misconception about the pyramids is that they were built by slaves. Recent archaeological evidence suggests they were instead constructed by paid workers. Some may have performed this work as a form of tax payment for several months of the year. Skilled engineers would have planned and orchestrated the building. An estimated 10,000-20,000 people would have been working on a pyramid at any one point in time. They were well fed and provided with shelter near the pyramids. Plus their burial sites close by indicate they were respected and were not slaves.

Much of the limestone was quarried from the Giza plateau itself, meaning the stones did not need to be transported far. The granite casing of Menkaure’s pyramid, on the other hand, was transported from Aswan, around 600 miles, or 1000 km up the Nile.

Watch this video to get some more insights:

Can you believe ‘Origami Organs’ could be the future of regenerative medicine?

Will the nations be moved by the anguished cry of this atomic bomb survivor?

Look what Henna crowns do for cancer survivors

Watch this Spectacular ice-skating duo dance to the tune of Indian Film music!

Watch one of the most mind-boggling tricks in recent times!

Can you believe ‘Origami Organs’ could be the future of regenerative medicine?

Culture Suren Rao - October 2, 2017
The incredible tissue paper ‘origami organs’ made from cow and pig organs could one day be used to regenerate a human heart Can you believe...

Will the nations be moved by the anguished cry of this atomic bomb survivor?

Culture Suren Rao - September 28, 2017
Nobu Hanaoka was only eight months old when the US dropped ‘Fat Man’ -- a Plutonium bomb -- on the Japanese city of Nagasaki...

Look what Henna crowns do for cancer survivors

Culture Suren Rao - September 26, 2017
Henna tattooing has been in practice for thousands of years, and is traditionally used for special occasions like holidays, birthdays and weddings in Africa,...